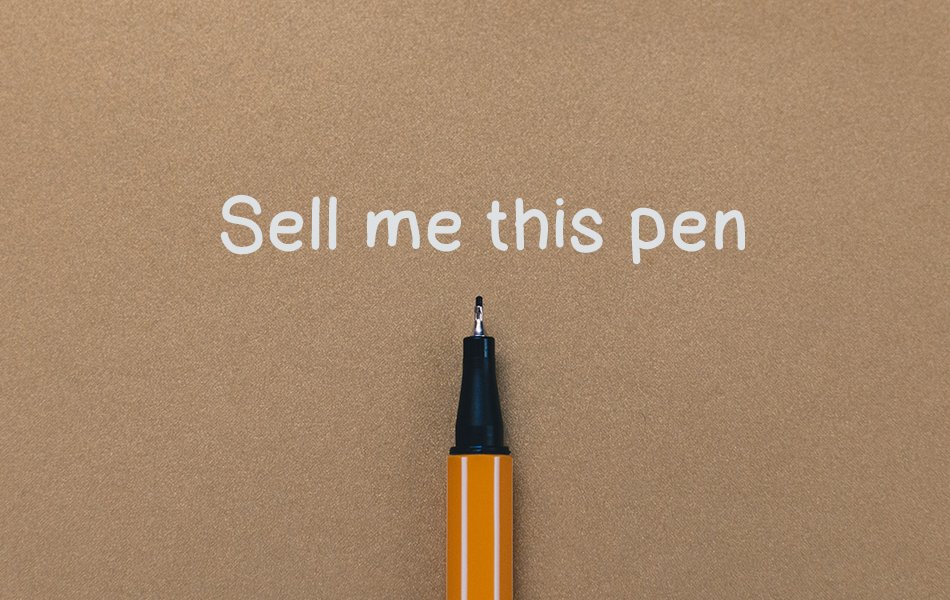 Chances are if you’ve ever applied for a sales role, or are planning to, you’ll have come across this question.

“Sell me this pen” is the interview question perhaps most-famous for being featured in the film Wolf of Wall Street.

It’s an age-old question, but often comes as a surprise and is always difficult to answer. Unless you’re prepared. That’s where Barnsley College come in. We’ve scoured the internet for advice from experts in sales to find out just how to answer this dreaded interview question.

Why do interviewers ask this question?

“Most interviewers are screening for confidence and cogency,” says Brett Cenkus, a Texas-based business consultant and lawyer who has trained sales professionals. “In general, interviewers use this question to get a feel for your sales style and experience.”

Asking you to sell the pen or whatever is in front of you, on the spot, not only tests your ability to think under pressure, articulate yourself and think quickly, but also your approach to sales in general.

Jordan Belfort, the stockbroker whose life the Wolf of Wall Street film is based on, has admitted that it is a trick question, but it still helps to make a distinction between an amateur and a real sales talent.

How do you go about answering it?

You need to sell the item, not as a commodity, but as a necessity. The best salespeople, according to Monster.com, do this by asking lots of questions.

“An ideal response to a question like this would be for the sales rep to start asking penetrating questions about me and my business that would help them identify whether or not I really need a pen in the first place,” says Christopher Searles, president of New York-based Searles Media, who interviews sales candidates on a weekly basis. “Being able to successfully identify a prospect’s needs is the single most important—and often most overlooked—aspect of being a good salesperson.”

“The real answer is, before I’m even going to sell a pen to anybody, I need to know about the person, I want to know what their needs are, what kind of pens do they use, do they use a pen? How often do they use a pen? Do they like to use a pen formally, to sign things, or use it in their everyday life? The first idea is that when you say ‘Sell me this pen,’ I want to hear [the salesman] ask me a question,” says Belfort.

Be ready to change tack

“Don’t be afraid to say, ‘Oh, sounds like you’re not in the market for the pen I’m selling. Do you know anyone who is?’” Cenkus says. “Don’t waste time pitching to people who don’t have any use for what you’re selling.”

Know when to give up – there’s no point in just pushing someone who really isn’t going to buy something until they get annoyed. But you can get them to help you.

Get them to sell it to you instead

Inc.com explains this sales tactic with an anecdote about Zig Ziglar, a legendary salesperson, author and motivational speaker who was once interviewed by Jimmy Carson. The interview went something like this:

Of course, you could use the rather reckless tactic that one Quora user, Bruce Gifford suggests:

‘First, decide not to take the job as the interviewer is a mindless twit.’
‘Second, take the pen, snap it in two, place the pieces on the desk, pause for a moment of dramatic silence, then stare intently into the interviewer’s eyes and say: “You need a new pen”.’