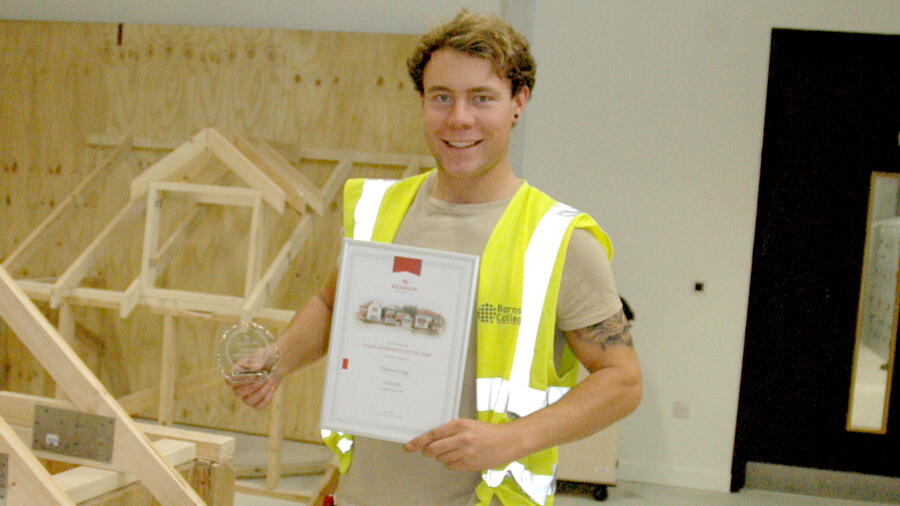 Tom with his award.

Joinery apprentice Tom Trigg is carving out his future by being named 2017 Apprentice of the Year for the Yorkshire region for Redrow Homes.

Currently studying a Level 3 Joinery Apprenticeship at college, Tom won the top award due to his hard work, commitment and determination throughout his work with Redrow Homes and his studies.

Tom, 20, from Wombwell, spends most of his time on-site helping to build new homes where he is being trained by West Yorkshire Joinery, a sub-contractor for Redrow Homes. He is gaining practical joinery skills at work which are being backed up by the theoretical knowledge he is learning at college.

Tom received his award at Redrow’s end of year celebrations where he was announced the winner and was presented with a trophy, certificate, bottle of champagne and a cash prize. He said: “It didn’t even cross my mind that I would have been considered for this amazing award; never mind actually winning it! It’s really nice to have and also to be recognised for my achievements.”

Paul Dyson, Tom’s Carpentry and Joinery tutor at college, said: “Tom really deserves this award and I am extremely proud of him. He puts in the time and effort at college listening and taking on board what I have to say. He has progressed from Level 1 to Level 3 Joinery and has got great potential for the future.”