Welcome to Hot Topics!  This page has been designed to provide you with further reading materials and links about the topics being promoted and covered in your LRC areas.  Want to know more about Shakespeare after the College Welcome ‘Midsummer Night’s Dream’ event or wondering why we have a fairy tale inspired castle in the computer suite?  Wonder no more!  You’ll also find useful guides and templates to help you should you wish to get involved with the LRC events and competitions being held throughout the year.

This page will be constantly updated, so please keep checking back for the latest!

Use the tiles below to jump to a specific topic:

Thank you for all of your submissions, the standard was extremely high making our decision very difficult!

You can view the winning entries here and all of the submissions on our Reading for Pleasure display on the first floor of the LRC until the new year.

We want your help to create some dynamic and engaging displays that will inform your fellow students about the numerous topics that are highlighted through international days/weeks in the up-coming months.

Do you have a flair for design?  A way with words?  An eye for detail?  Are you good at organising others, researching facts, sifting through lots of information for the most relevant parts?  Do you need evidence to contribute to any Connect badges you’re working towards?

If the answer is ‘yes’ to ANY of the above, please get in touch with us at curve@barnsley.ac.uk, speak to a member of the LRC team or fill out this quick signup sheet: https://forms.office.com/r/M4gCXMU1cJ

This term the LRC is diving into the depths of myths, legends and folklore.
What are they? Why are these stories and creatures still so popular today? Is there any truth behind them?

Old stories can usually be divided into histories, myths and legends:

• History describes events that we know actually happened.
• Legends tell the stories of heroes and their heroic actions but have not necessarily been proven.
• Myths focus on stories about creatures, divine beings and gods and again, have never been proven to be real.

Whatever category the stories fall into, they were often passed down from generation to generation by word of mouth as a way of recording knowledge and beliefs. Folktales tell us how we lived and often keep local history alive, building connections to the land and meaning to the environment around us. They were also a means of entertainment on cold winter nights and a way of teaching important morals and lessons to the next generation.
Every country has its own collection of myths and legends and these were often influenced by their understanding and interpretation of their environment. As travel and exploration became more widespread, these stories and beliefs traveled too. Britain has developed a wide variety of folklore tales due to the settlement of different people and cultures on her shores; Celtic, Norse mythology, Roman and even Greek influences. There are (understandably) a great deal of oceanic and water themed folk tales from these predominately coastal places. 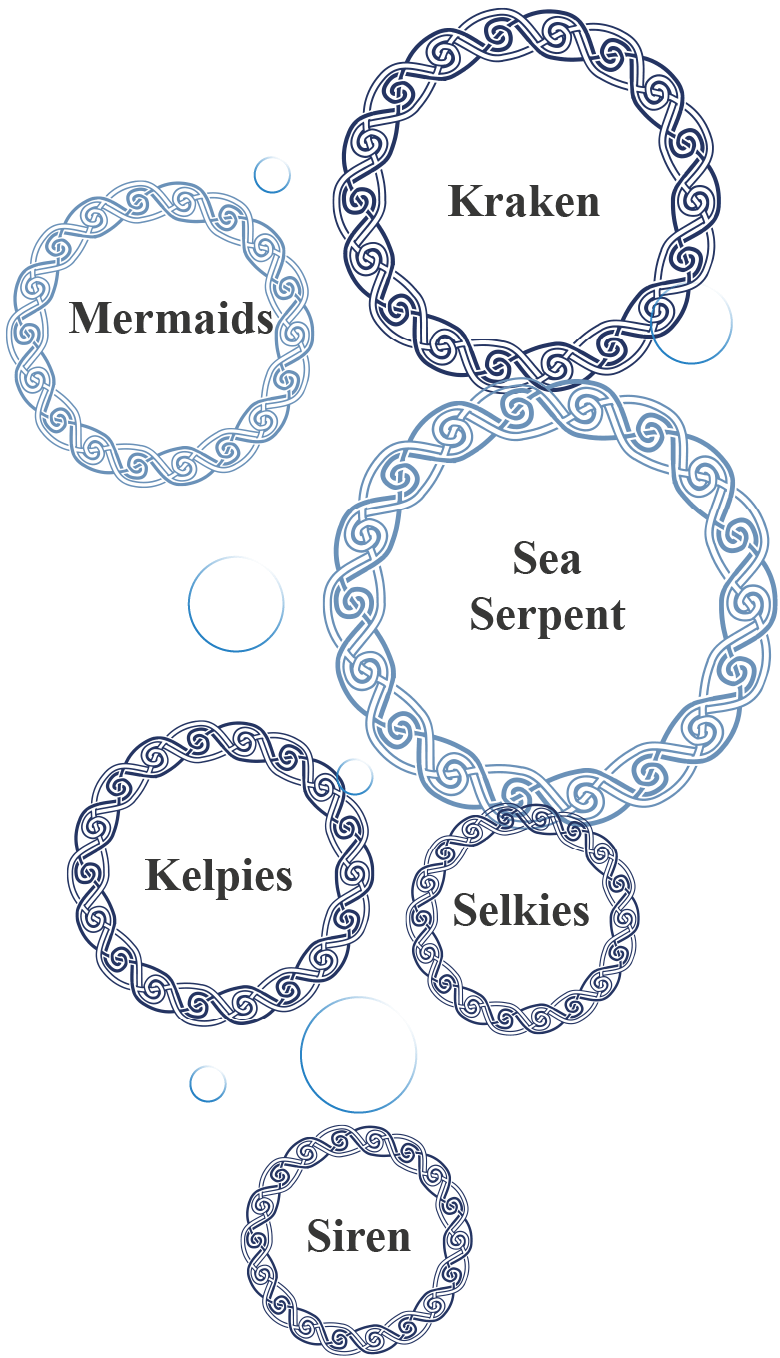 The sea held many mysteries in its vast, deep, dark and unpredictable waters, demanding respect from all who ventured on her and, unsurprisingly, these fed many superstitions within the sailing community during a time of limited scientific knowledge. Even today, with more technology and science, only a small part of the world’s oceans have been fully explored, meaning we still do not know what lies beneath the waves…

If you haven’t seen something, does that mean it doesn’t exist? Many of the following mythical creatures feature in folklore because of the very fact that people believed in them. Sometimes it can be argued that the sightings were mistaken identity, for example sightings of a giant squid, sperm whale or oarfish, and so some of the creatures still do exist. But with 95% of the world’s oceans still a mystery, it is plausible that there are species and creatures yet to be discovered or rediscovered.

Select the bubbles to find out more about each creature.

Disclaimer
Whilst we have done our best to gather Information from reputable sources, we understand that we may have made unintentional omissions simply because we don’t know. We ask for your patience, and please know that we are always grateful if someone wishes to share their knowledge to fill in any gaps. Thank you for your understanding.

What is LGBTQ+ History Month and why do we celebrate it?

While LGBT+ History Month originated in the US in 1994, It began 11 years later in the UK following on from an initiative that was created by a group of teachers. In 2005, educators and activists Sue Sanders and Paul Patrick organised LGBT+ History Month as part of a Schools Out UK project. This is a programme that aims to educate young people about the issues members of the LGBT+ community face and to make schools feel inclusive for everyone, regardless of their gender identity or sexual orientation. The event was held in February to coincide with the 2003 abolition of Section 28 of the 1988 Local Government Act.

Section 28, a piece of legislation introduced by Margaret Thatcher’s Conservative government, stated that local authorities were not allowed to “intentionally promote homosexuality or publish material with the intention of promoting homosexuality”. This piece of legislation prevented teachers from talking about same-sex relationships in schools, forcing teachers to hide their identity or leave their jobs. This scarred a generation of LGBT+ people – all at the height of the HIV/AIDS crisis, causing more hurt to an already marginalised community.
Despite being scrapped in 2000 in Scotland and 2003 in England and Wales, Section 28 still casts a shadow within education and beyond.

What is the difference between Pride Month and LGBTQ+ History Month?

February is LGBTQ+ History Month, a 28-day celebration to honour lesbian, gay, bisexual, transgender and queer achievement and influence on the world. The Month is intended to bring queer history to light in education after this long period of school children growing up hearing nothing positive about LGBTQ+ people and our lives.
Pride Month is focused on honouring the visibility of LGBTQ+ people as well as the movement towards equality. Pride is celebrated in June to commemorate the 1969 Stonewall Riots. Pride Month is observed with parties, parades, concerts, and other events that celebrate queer identity, and it is also a time for raising awareness of ongoing issues affecting the LGBTQ+ community.

Where is the flag from?

Intersex journalist and media personality Valentino Vecchietti designed the new rendition of the rainbow Pride flag. The flag was officially unveiled by the advocacy group Intersex Equality Rights UK in late May but has since spread virally on social media, continuing a tradition of Pride flags being updated and reimagined.

“We really need support to gain [equal] rights and access to ethical healthcare which is centred around our needs. And we need non-consensual, non-essential, surgeries and medical interventions in childhood to end.”- Valentino Vecchietti.

As the new design of the Progress Pride flag continues to be shared and celebrated, Vecchietti hopes the new iteration can “empower” the LGBTQ+ community and allies to be more inclusive of intersex.

Rainbow flags have been used in many places over the centuries: in the German Peasants’ War in the 16th century, as a symbol of the Cooperative movement; as a symbol of peace, especially in Italy; to represent the Tawantin Suyu, or Inca territory, mainly in Peru and Bolivia; by some Druze communities in the Middle east; by the Jewish Autonomous Oblast; to represent the International Order of Rainbow for Girls since the early 1920s, and as a symbol of gay pride and LGBT social movements since the 1970s.
Gilbert Baker (June 2, 1951 – March 31, 2017) was an American artist, gay rights activist, and designer of the rainbow flag (1978), a worldwide symbol of LGBTQ+ pride.
Today, the flag is flown as a sign of inclusion. When flown outside businesses, or placed in shop windows, it tells LGBTQ+ people they can relax, and feel safe to do what others’ take for granted: to hold

hands or kiss their partners, to rent a hotel room together, to book a table for Valentine’s Day, to demonstrate their love without hate. As an image, it reminds us of not only the diversity of sexual orientation but also of the diversity of human characteristics as a whole.

Characteristics help shape identity. The flag’s 6 colours represent different aspects of LGBTQ+ communities, but the rainbow is also a symbolic representation of the variety of human expression, in all its hues and shades. The widespread use of the pride flag allows LGBTQ+ individuals to connect with each other and feel included regardless of their location. No matter where you are or how you identify, the rainbow colours are meant to signify that you are included, welcome, and safe as part of the LGBTQ+ community.

Ask for my pronouns!

It’s a simple way to respect identities… because you can’t judge a book by its cover, and you can’t tell someone’s gender by their looks!
LGBTQ+ History Month raises awareness of gender-neutral pronouns and diversity in gender identities, demonstrating that asking someone what pronouns they use is a simple way to show respect.
Gender neutral pronouns are singular third person pronouns that function exactly like he/him and she/her in a sentence. Common gender-neutral pronouns include the singular they/them, and neologisms (newly created words) such as ze/zir, pronounced ‘zee’ and ‘zeer’.

Finding out what pronouns someone uses is as easy as asking (when you can catch a private moment): “What pronouns do you use?”

Where did gender neutral pronouns come from?

The gender neutral pronouns they/them/theirs have been used in the singular since at least as far back as the 15th Century:

“There’s not a man I meet but doth salute me / As if I were their well-acquainted friend” — Shakespeare, Comedy of Errors

When is it appropriate to use gender neutral pronouns for someone else?

When someone is describing another person whose gender identity and pronouns they are not aware of (see, we just did it in this very sentence!)
This can be hard!
Getting used to using gender-neutral pronouns, or even asking people what pronouns they use, can take practice. The Student Union in the Old Mill Lane campus are offering students free pronoun badges! This is a common way to display your preferred pronouns and makes addressing your peers that little bit easier.

Here are a couple of other suggestions for ways to practice on your own:

Select the images below to learn more about these people.

Banning of books in the United States

Book bans have plagued many US schools throughout 2022, with stories focusing on LGBTQ+ and race issues being targeted by conservatives across the country.
Through the first eight months of 2022, there were 681 attempts to ban or restrict library resources, targeting 1,651 different books (according to the American Library Association.)
The Keller Independent School District in Texas spoke with The Washington Post in the wake of the US book bans. “Students are upset, especially LGBTQ+ students,” said a Keller employee who spoke on the condition of anonymity for fear of professional retribution. “They want to see themselves in books, they want to see themselves reflected, and they’re not able to.”
“I don’t expect this to be waning,” said Jonathan Friedman, director of free expression and education programmes at Pen America, which champions freedom of writing and speech worldwide.